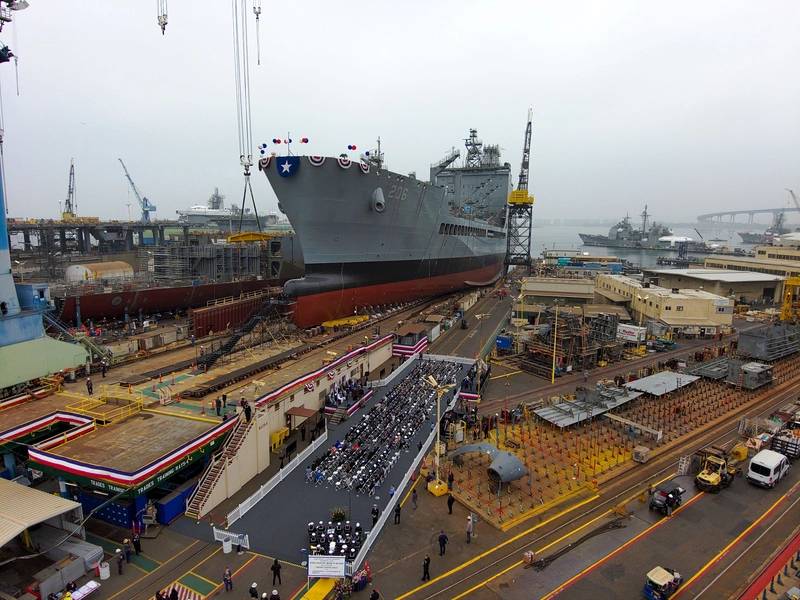 In 2016, General Dynamics NASSCO was awarded the contract by the U.S. Navy for the detailed design and construction of the next generation of fleet oilers, the John Lewis-class (T-AO 205). The contract calls for the design and construction of six 742-foot-long oilers with a full load displacement of 49,850 tons. Designed to transfer fuel to U.S. Navy carrier strike group ships operating at sea, the oilers have the capacity to carry 157,000 barrels of oil, a significant dry cargo capacity, aviation capability and up to a speed of 20 knots. The John Lewis-class ships will replace the current T-AO 187-class fleet replacement oilers.

Former Secretary of the Navy Ray Mabus declared the John Lewis-class of oilers be named after leaders who fought for civil and human rights. The second of six ships honors Harvey Milk, human and civil rights activist who dedicated his life advocating for equality.

“Leaders like Harvey Milk taught us that diversity of backgrounds and experiences help contribute to the strength and resolve of our nation,” said Secretary of the Navy Carlos Del Toro. “There is no doubt that the future Sailors aboard this ship will be inspired by Milk’s life and legacy.”

Stuart Milk, nephew of the ship’s namesake and Co-Founder and President of the Harvey Milk Foundation, served as the principal speaker at the ceremony in addition to remarks from NASSCO and U.S. Navy representatives.

U.S. Senator Dianne Feinstein (D-CA) and Paula Neira, Navy Veteran and Clinical Program Director of the Johns Hopkins Center for Transgender Health were the ship’s sponsors. Prior to launching the 742-foot-long ship down the ways, Neira christened the ship with the traditional champagne bottle break alongside the hull.

“We are justifiably proud of every ship we build, but this one is special because of her namesake. Today, we are honoring Stuart’s lifetime of selfless service, his hope for equality, and a world without hate,” said David Carver, president of General Dynamics NASSCO. “On behalf of the 35-hundred employees of General Dynamics NASSCO, I am proud to present the future USNS Harvey Milk for christening.”

“The christening of the USNS Harvey Milk marks another historic milestone in the history of our Navy and our country. Harvey Milk’s words and actions brought hope and inspiration to many for whom our nation’s lofty rhetoric of equality and inclusion were not yet reality,” said ship sponsor Paula Neira. “Today, while we must continue to carry on his work, and much work still needs to be done, by christening and launching this ship we honor his legacy, celebrate the progress that has been made in advancing diversity and inclusion for so many, and we know that wherever the USNS Harvey Milk will sail, she will bring that message of hope and inspiration to present and future generations.”

In addition to the christening of this ship, two ships in the T-AO class fleet oiler program for the U.S. Navy –the future USNS Earl Warren (T-AO 207), and the future USNS Robert F. Kennedy (T-AO 208) – are currently under construction. The lead ship, the future USNS John Lewis (T-AO 205) was launched earlier this year.