US Soy Exports Picking Up – BIMCO

After a slow start to the export season, partly due to disruption from Hurricane Ida, U.S. soy bean inspections ahead of exports have jumped to 1.6 million tonnes in the week ending October 7, according to shipping organization BIMCO. This represents a 90.9% jump from the week before and is the highest level seen since the start of February 2021 which marked the end of the main export season of the 2020/2021 marketing year.

In the first six weeks of the 2021/2022 marketing year, which started on September 1, inspections of U.S. soy beans are down 64% from the same period in the last season, representing a loss of 6.1 million tonnes, reflecting the slower start to the year. Even with last week’s sudden increase, weekly inspections are still below levels seen at this time last year. The previous marketing year had an exceptionally strong peak export season, but even so, last week was the first time that inspections rose above levels seen at the 2019/2020 season. 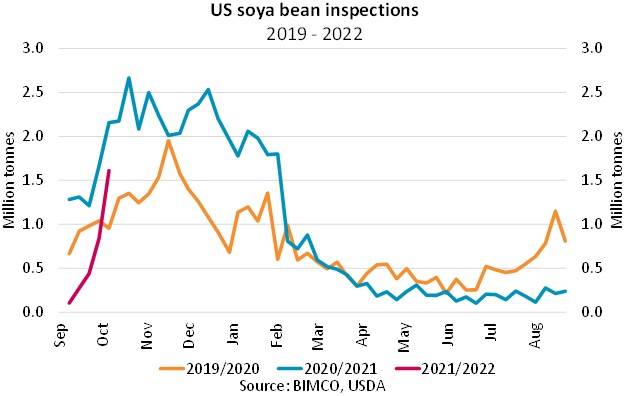 “The terminals disrupted by hurricane Ida are returning to full capacity just as the four most important months for U.S. soy bean exporters kick off, as most exports take place between October and January. Although the pace of exports will undoubtedly pick up from here, they are unlikely to match the record high 2020/2021 season, however. Despite this, the mainly mid-sized ships that cater to this trade can expect solid exports this season,” said Peter Sand, BIMCO’s Chief Shipping Analyst.