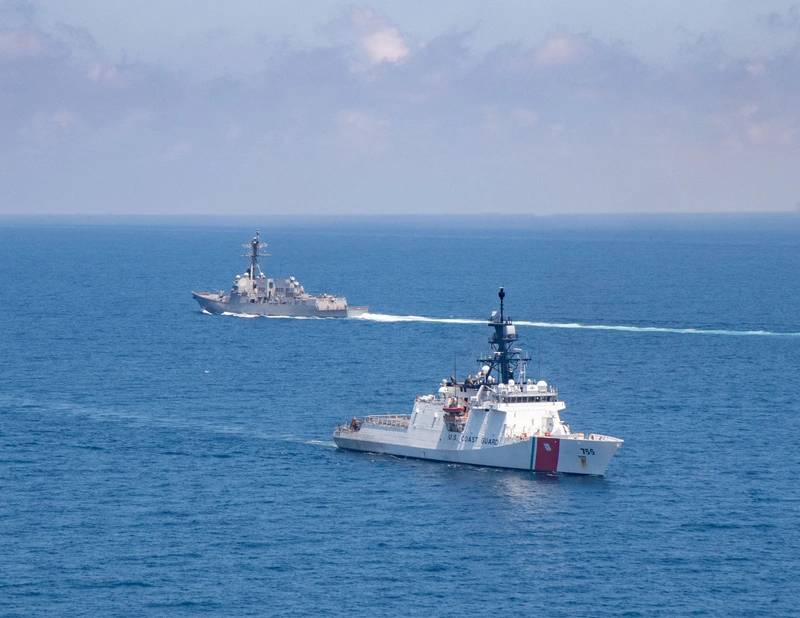 A U.S. warship and a U.S. Coast Guard cutter sailed through the Taiwan Strait on Friday, the latest in what Washington calls routine operations through the sensitive waterway that separates Taiwan from China, which claims the self-ruled island.

The passage comes amid a spike in military tensions in the past two years between Taiwan and China, and follows Chinese assault drills last week, with warships and fighter jets exercising off the island’s southwest and southeast.

USS Kidd, an Arleigh Burke-class guided-missile destroyer, accompanied by the Coast Guard cutter Munro, transited “through international waters in accordance with international law,” the U.S. Navy said in a statement.

“The ships’ lawful transit through the Taiwan Strait demonstrates the U.S. commitment to a free and open Indo-Pacific. The United States military flies, sails and operates anywhere international law allows,” it said.

The U.S. Navy has been conducting such operations every month or so, angering China, which sees Taiwan as its territory and has never renounced the use of force to bring the democratic island under its control.

China on Saturday called the move “provocative,” saying the Eastern Theater Command of the People’s Liberation Army organized troops to follow, monitor and guard the course of the U.S. ships operations.

“The U.S. has frequently carried out similar provocative acts, which are of a very bad nature, fully showing that it is the biggest destroyer of peace and stability and the biggest cause of security risks in the Taiwan Strait. We firmly oppose and strongly condemn this,” defense ministry spokesperson Tan Kefei said in a statement.

“Taiwan is an inseparable part of China. The Taiwan issue is China’s internal affair and allows no external interference. We call on the U.S. to recognize the situation, stop provocation and abide by the One China principle and the provisions of the three Sino-U.S. joint communiques.”

The United States, like most countries, has no formal diplomatic ties with Taiwan, but is its most important international backer and a major seller of arms to the island.

Taiwan and the United States in March signed an agreement establishing a Coast Guard Working Group to coordinate policy, following China’s passing of a law that allows its coast guard to fire on foreign vessels. read more

Friday was not the first time a U.S. Coast Guard cutter has sailed through the Taiwan Strait.

But it was a reminder that it is now keeping vessels in the region and “engaging in more joint training and law enforcement diplomacy to help strengthen partner nation capacity vis-a-vis Chinese encroachments,” said Greg Poling, a maritime security expert at Washington’s Center for Strategic and International Studies.

China’s state-controlled media have seized on the United States’ chaotic withdrawal from Afghanistan in recent weeks to portray U.S. support for Taiwan and regional allies as fickle.

But U.S. President Joe Biden’s administration has been quick to dismiss any comparison between Afghanistan and the U.S. commitment to the Indo-Pacific.

Vice President Kamala Harris accused China of “bullying and excessive maritime claims” during trips to Vietnam and Singapore this week, the latest in a string of visits by top U.S. officials to the Indo-Pacific aimed at cementing U.S. commitment to the region.