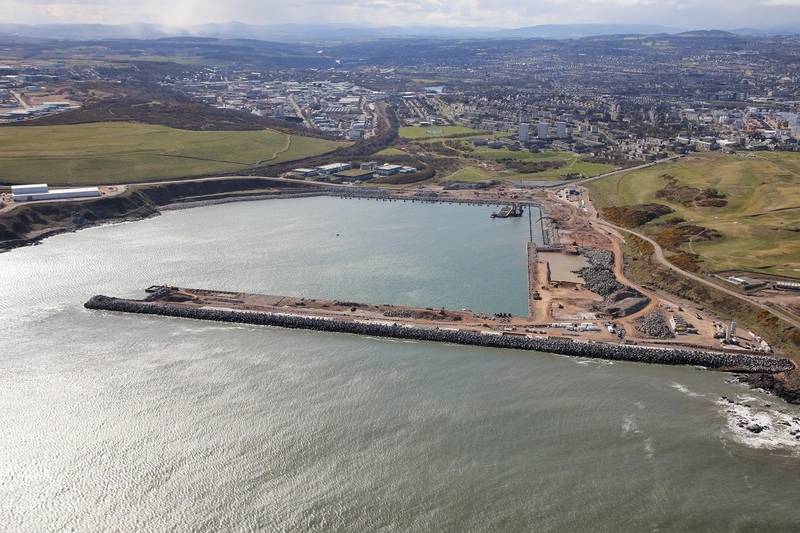 Aberdeen Harbour Board has awarded two new contracts for the construction of the South Breakwater and Crown Wall, with a total value of £60 million (USD 83,5 million)

Dutch marine and offshore contractor Van Oord will act as the principal contractor for the 550-meter-long South Breakwater, and Scottish-based construction firm Beattie FRC will build the concrete Crown Wall along the length of the North Breakwater.

Both structures will provide critical protection for vessels and operations within the Harbour expansion, ultimately protecting the port from a one-in-300-year storm. Work on site will start imminently, Aberdeen Harbour said Friday.

Keith Young, AHEP Project Director at Aberdeen Harbour Board, said: “The construction of the South Breakwater and Crown Wall form a significant part of the final 30% of construction, and I look forward to seeing the structures take shape in the coming months.

“Van Oord and Beattie FRC bring a wealth of engineering skill and innovation to the project, and their work will ultimately ensure smooth and safe marine and land-based operations at South Harbour for our customers and port users.”

Paul Hesk, Area Manager for Van Oord, said: “We are very pleased that Aberdeen Harbour Board has entrusted us with delivering a further critical element of its harbor expansion project. Our experienced site team will deploy specialist equipment and methodologies to ensure the new breakwater is constructed safely, whilst at the same time minimizing the impact of our work on the marine environment and rich wildlife of the surrounding area.”

The 10-meter-high Crown Wall – or wave wall – will be built using concrete produced at the batching plant on the northwest corner of the expansion site. The wall will ensure extremely high waves cannot obstruct operations on the East Quay (Dunnottar Quay).

Vincent O’Donnell, Director for Beattie FRC, said: “The Aberdeen Harbour expansion project is a significant project for Scotland, and we are proud to build the Crown Wall, which is significant to the overall running of South Harbour. We look forward to working on site this year.”