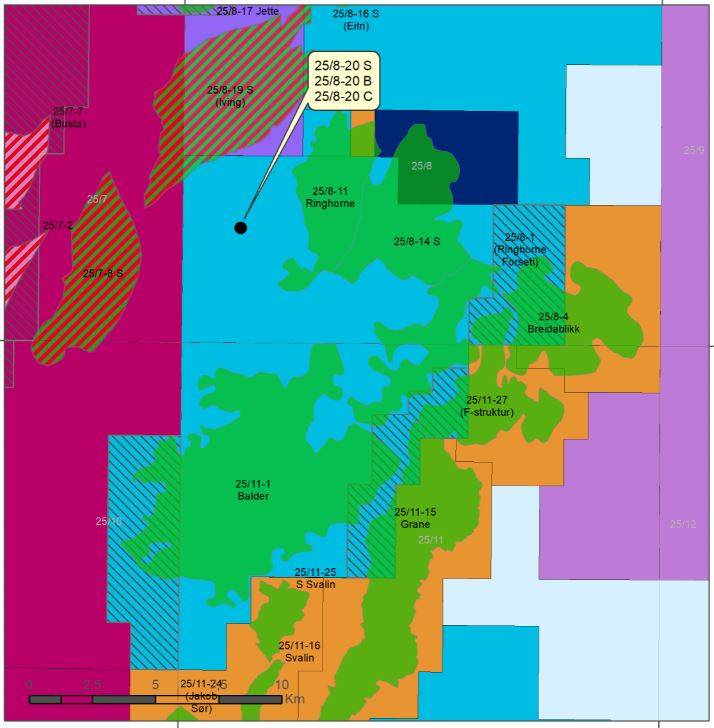 Vår Energi announced a new significant oil and gas discovery in production license PL027 in the Southern North Sea, with the dual branch exploration wildcat Prince 25/8-20 S, King 25/8-20 B and the appraisal side-track 25/8-20 C in the King Paleogene prospect.

The exploration well is located in direct reach of existing infrastructure, approximately 6 kilometers north of the Balder field and 3 kilometers west of the Ringhorne platform in a water depth of 128 meters and is considered as commercial discovery. Operator Vår Energi holds a 90% stake of the license and Mime Petroleum is partner with 10%.

The Prince wildcat well-branch reached a vertical depth of 2,374 meters below sea level and encountered an oil column of about 35 meters in the Triassic Skagerrak formation within good to moderate reservoir sandstones.

Wildcat well-branch King reached a vertical depth of 2,353 meters and discovered a gas column of about 30 meters and a light oil column of about 55 meters with some thick Paleogene injectite sandstone with excellent reservoir properties. Deepening of the well indicated further the lateral continuity of the Triassic Prince Skagerrak discovery in an adjacent fault block towards the Ringhorne Platform.

An additional King appraisal side/track further confirmed the lateral extend and connectivity of the Paleogene reservoir sands and proofed a gas column of about 40 meters and an oil column of about 55 meters in injectite sandstones, of which about 35 meters are formed by thick and massive oil bearing sandstone with excellent reservoir quality.

The well was not formation tested, but extensive data collection and sampling has been performed which indicates a production potential of approximately 10,000 boepd per well.

Preliminary estimates place the size of the discovery between 220 and 360 Mboe hydrocarbon in place (60-135 million barrels of recoverable oil equivalents), split among 140 and 250 Mboe in the Paleogene reservoir and between 80 and 110 Mboe in the Triassic Skagerrak reservoir with significant further upside potential in both discoveries to be verified with further exploration/appraisal activity. Vår Energi is evaluating a rapid tie-in to the existing infrastructure of the Balder Ringhorne area to accelerate the exploitation of the Paleogene resources.

“The discoveries prove that there are still opportunities in the mature areas on the Norwegian Continental Shelf. I’m proud to represent yet another discovery that will generate activity and create value – for the company, the owners, the supplier industry and the society at large. Clearly, our near-field exploration strategy is paying off and is certainly an approach we will continue to pursue,” said Vår Energi CEO, Torger Rød.

After the recently announced Isflak discovery in the Barents Sea and the Blasto and Garatiana West discoveries in the Northern North Sea, King/Prince further validates Vår Energi’s successful Infrastructure – Led exploration strategy also in the Southern North Sea by proofing additional high value resources in the Balder Ringhorne Area that can potentially be exploited with a fast track solution.

“We know that there is significant remaining exploration potential in the Balder licenses and I’m proud and glad to see that all the hard work put down by the team has paid off,” said Vår Energi VP Exploration Denis Palermo. “We have years of experience and huge amounts of data from the Balder area. Thanks to a systematic exploration strategy, our deep understanding of the area, thorough geological processes, and new technology we are able to unlock the true Balder potential.”

“The discoveries fit in well with our area plans and continuous development of the Balder Area as an important production hub for Vår Energi. We are in the process of revitalizing the area and these discoveries will increase future value creation,” said Vår Energi VP Field Development and Projects, Bjørn Thore Ribesen.

Vår Energi has ownership in 137 licenses and oil and gas production from 35 fields. Vår Energi operates over the whole Norwegian continental shelf; the Goliat field in the Barents Sea, the Marulk field in the Norwegian Sea and the Balder and Ringhorne fields in the North Sea. The company has an organization with 900 employees with more than 50 years’ experience on the Norwegian continental shelf, built on the previous companies’ heritage offshore Norway. Vår Energi’s current production stands at approximately 280,000 boepd.