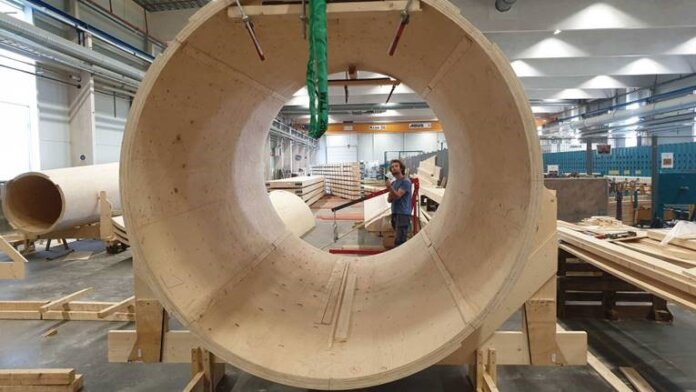 Vattenfall and Modvion, a company that develops designs made of laminated wood for large-scale applications, have entered into a collaboration to use wooden towers for onshore wind turbines, a venture expected to reduce carbon dioxide emissions in manufacturing by at least 25%. Vattenfall will be assessing Modvion’s wooden tower for potential use in future wind farms.

“During their life cycles, Vattenfall’s wind turbines already have very low levels of climate-impacting emissions,” says Daniel Gustafsson, head of Swedish land-based wind power development at Vattenfall. “We want to drive those levels down even further. We see that wooden towers can be part of our solution for decreasing our carbon dioxide footprint, which can complement the work we are already doing with fossil-free steel as an example.”

Approximately one quarter of the climate impact that arises when manufacturing wind turbines comes from the tower, normally constructed of steel and sometimes concrete. Going forward, steel will continue to be used in many parts of the wind turbines, but wooden towers can become an important addition.

By building towers of wood, the carbon dioxide emissions caused by manufacturing can be radically reduced, while the carbon dioxide absorbed by trees as they grow is also stored in the wooden towers. In addition, certified sustainable wood raw material is used, which means, among other things, that new trees are planted.

Modvion and Vattenfall have signed a letter of intent to enter into a business development project for evaluating building technology and commercialization with the aim of supplying wooden towers to Vattenfall. Vattenfall’s portfolio has the potential of approximately 5000 MW for projects on land, under development or in the process of being built on its various markets.

-Wooden towers are built in modules and assembled on site
-The modular concept together with the lower weight of wood, enables higher towers to be built while still using normal roads for transportation
-In April, Modvion erected the first wooden tower in Björkö outside Gothenburg, Sweden, which is 30 meters tall. In 2022, the first commercial tower will be built