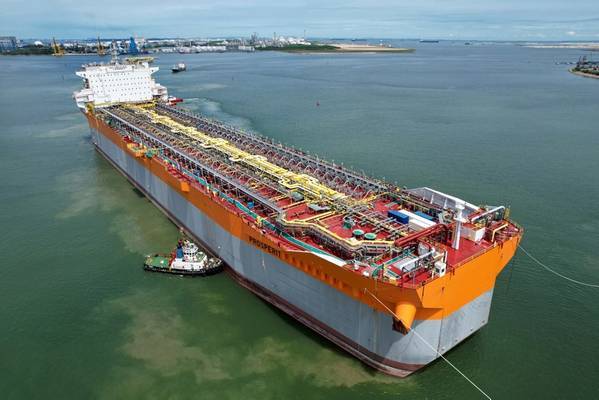 The hull of the Prosperity FPSO has recently arrived from China where it was built to Singapore where Keppel will mate it with topside modules, after which the vessel will set sail for Guyana, to become the South American country’s third FPSO in production.

The FPSO hull arrived in Singapore in August, when SBM Offshore, the Dutch provider of FPSO units that will deliver the FPSO to end client ExxonMobil, said that drydocks activities would start the fourth quarter of 2021, with the installation of major structures that will support the Mooring and Subsea Risers. The FPSO is on schedule for completion in 2024.

Now, SBM Offshore has shared a video of the Prosperity FPSO’s entering into drydock in Singapore:

Once completed, the Prosperity FPSO will join her sister vessel Liza Unity, which recently set sail for Guyana, and the smaller Liza Destiny, which has been producing oil offshore Guyana since December 2019.

SBM Offshore is responsible for the construction, installation, and operation of the Prosperity FPSO, which will be deployed at ExxonMobil’s Payara project off Guyana.

SBM Offshore will operate the FPSO at the Stabroek Block for up to two years, after which the FPSO ownership and operation will transfer to ExxonMobil. The first oil is expected in 2024.

The Prosperity FPSO will utilize a design that mostly replicates the Liza Unity FPSO design. Once installed, the FPSO will produce roughly 220,000 barrels of oil per day and will be able to store around 2 million barrels of crude oil.

In the past few years, Exxon has discovered around 10 billion barrels of oil in the Stabroek Block and expects to bring at least six projects online by 2027. It sees potential for up to 10 projects to develop its current recoverable resource base in the country.

Most recently, on October 7, ExxonMobil announced another oil discovery in its prolific offshore block, at the Cataback-1 well, which brings the total significant discoveries to more than 20 within the Stabroek Block.