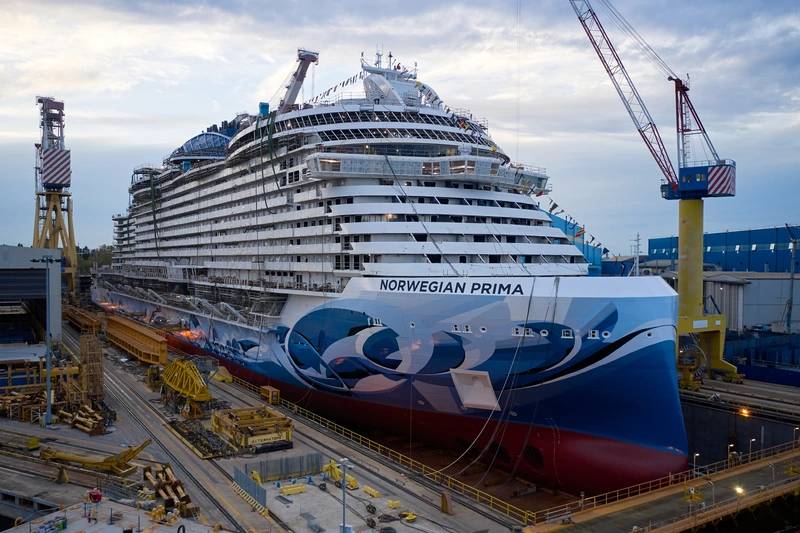 Norwegian Cruise Line’s new cruise ship Norwegian Prima was floated out at the Fincantieri shipyard in Marghera (Venice) this week.

Along with her sister-ships, “Norwegian Prima” will form the backbone of the future NCL fleet, being more than 142,500-tons, almost 300 meters long, and accommodating 3,215 guests, Fincantieri said Friday. Deliveries are scheduled between 2022 and 2027.

“The class is based on a prototype project developed by Fincantieri, which enhances the consolidated features of NCL’s signature offering of freedom and flexibility, qualified by an innovative configuration for an enhanced passenger experience. In addition, focus was set on energy efficiency, with the twofold aim of optimizing consumption at sea and reducing environmental impact, compliant with all the most recent regulations on this matter,” Fincantieri said.

“A ship’s float out is always a significant milestone, but this one is particularly special,” said Harry Sommer, president, and chief executive officer of Norwegian Cruise Line. “Our 18th ship, Norwegian Prima represents an exciting new chapter for our Brand and the first vessel to be delivered in our groundbreaking new Prima Class. We’ve worked closely with our partners at Fincantieri to deliver a truly remarkable vessel. Their passion, skill and craftsmanship has brought to life one of the most stylish and innovative ships to ever set sail. I’m thrilled we’re now one step closer to welcoming our guests onboard in just 12 months’ time.”

Starting in the summer of 2022, Norwegian Prima will offer itineraries in Northern Europe with voyages from Amsterdam, Netherlands, and Copenhagen, Denmark giving guests the opportunity to explore the Norwegian Fjords and Baltic Sea.

It will then sail a 12-day transatlantic voyage from Southampton to New York via Scotland’s Shetland Islands, Halifax in Nova Scotia with an extended overnight stay in Reykjavik, Iceland.

Through the fall and winter, Norwegian Prima will offer a variety of Bermuda and Caribbean cruises from New York; Galveston, Texas; Miami and Orlando (Port Canaveral), Fla., including calls to Harvest Caye, the NCL’s private resort destination in Belize as well as the NCL’s private island, Great Stirrup Cay, in the Bahamas.