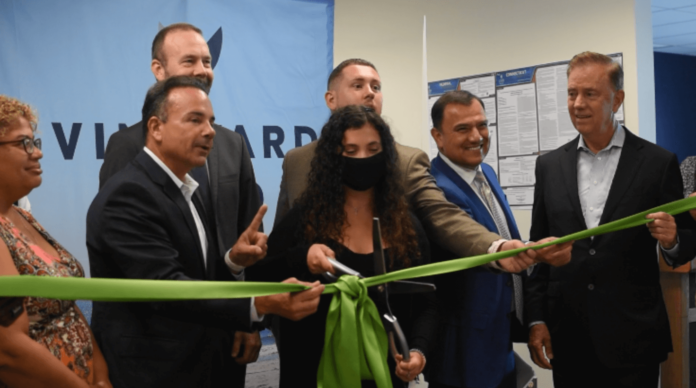 The Park City Wind (PCW) office, located at 350 Fairfield Ave., will serve as the base of operations for more than a dozen employees. The PCW project was selected by the Connecticut Department of Energy and Environmental Protection in December 2019 to provide 804 MW of offshore wind energy to the state. PCW, which will provide roughly 14% of the state’s electricity supply, is expected to include an estimated $890 million in direct economic development in Connecticut.

Vineyard Wind also recently announced that Barnum Landing, a 15-acre parcel located at 525 Seaview Ave., will be used during the construction phase of the PCW project, which will include storage and assembly of the transition pieces, the portion of the turbine that anchors the body of the machines to the steel foundation. Once construction is completed, Vineyard Wind intends to use 3 acres of the port site for an operations and maintenance hub that will support local jobs for the 20-plus-year lifespan of the project.

“The opening of this headquarters is an important milestone for Park City Wind, the City of Bridgeport and the State of Connecticut,” comments Gov. Ned Lamont, D-Conn. “Our state is on the cusp of being a national leader in offshore wind, and this public-private partnership is the beginning of a long and prosperous relationship.”

Lars T. Pedersen, CEO of Vineyard Wind, says, “Between the teams that will work out of these offices and the many construction jobs at Barnum Landing, we are taking concrete steps toward making Bridgeport a hub for this new and growing industry.”

AVANGRID, a 50% partner in Vineyard Wind, is headquartered in Orange, Conn., and has already been serving the state for over a century through its subsidiaries United Illuminating, Southern Connecticut Gas and Connecticut Natural Gas.