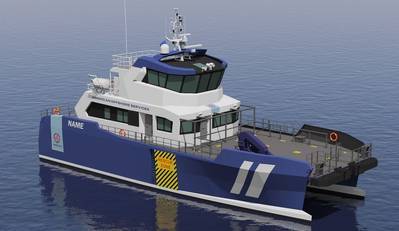 The new 30-meter (99-ft.) twin-hull CTVs will be powered by four IPS900 propulsion drives, two in each hull. The fully integrated system will also include Volvo Penta’s GPS-based Dynamic Positioning System and integrated joystick controls, allowing for convenient and easy maneuverability even in conditions of strong currents and high waves.

All subsystems will be connected by Volvo Penta’s Electronic Vessel Control (EVC) data network. The four new CTVs will be delivered from the Rhode Island shipyard in 2023 and 2024. AOS has contracts to support four new wind farm construction projects on the U.S. East Coast. The CTVs will carry workers, equipment, and spare parts to the wind turbines.

Jens Bering, vice president, marine sales, Volvo Penta of the Americas, commented: “The quad IPS configuration is ideally suited to the unique requirements for these highly specialized boats, providing a unique combination of high top speeds to minimize transit times, excellent slow-speed torque and superior grip when loading and unloading crew and gear at the turbines.”

“The hull design and IPS drives will also provide a smooth and stable ride for passengers and crew under all sea conditions, an important consideration for workers’ productivity when they arrive at their worksite,” Bering added. Offshore wind farming is a naturally clean and environmentally friendly industry with a large focus on reducing both costs and emissions. “The EPA IMO Tier 3 engines deliver low emissions and industry-leading fuel economy at all speeds, resulting in significant savings in operating costs,” said Bering.

AOS is a joint venture between Northern Offshore Services (NOS) in Sweden and SEA.O.G Offshore in the U.S. NOS is one of the largest CTV operators in northern Europe and the United Kingdom.

“NOS is not new to the major benefits that the Volvo Penta IPS offers operators. In fact, NOS was one of the pioneer companies who trusted the system, even before Volvo Penta had brought it to the marine commercial market in Europe,” Volvo Penta said.

“The decision to specify the Volvo Penta quad IPS for these four newbuilds was based in part on NOS’ operational experience with IPS-powered CTVs servicing wind farms in Europe,” said James Clouse, CEO of AOS. “Proven reliability is an important concern for these hard-working service craft, and Volvo Penta’s reputation for dependable products is well known in the industry.”

“This contract to build four new CTVs is an important milestone for our company and validates our position as a pioneer and major supplier of CTVs to meet the growing demand for these specialized support craft for the burgeoning American offshore wind industry,” said Marcia Blount, president of Blount Boats, which built Atlantic Pioneer, the first CTV for the U.S. market, in 2016.

The new CTVs will fully comply with Jones Act requirements that craft operating between U.S. ports and offshore platforms must be constructed in American shipyards and crewed by U.S. seafarers. Power Products Systems LLC, Volvo Penta’s Power Center for New England, will be responsible for local service and support for the project.