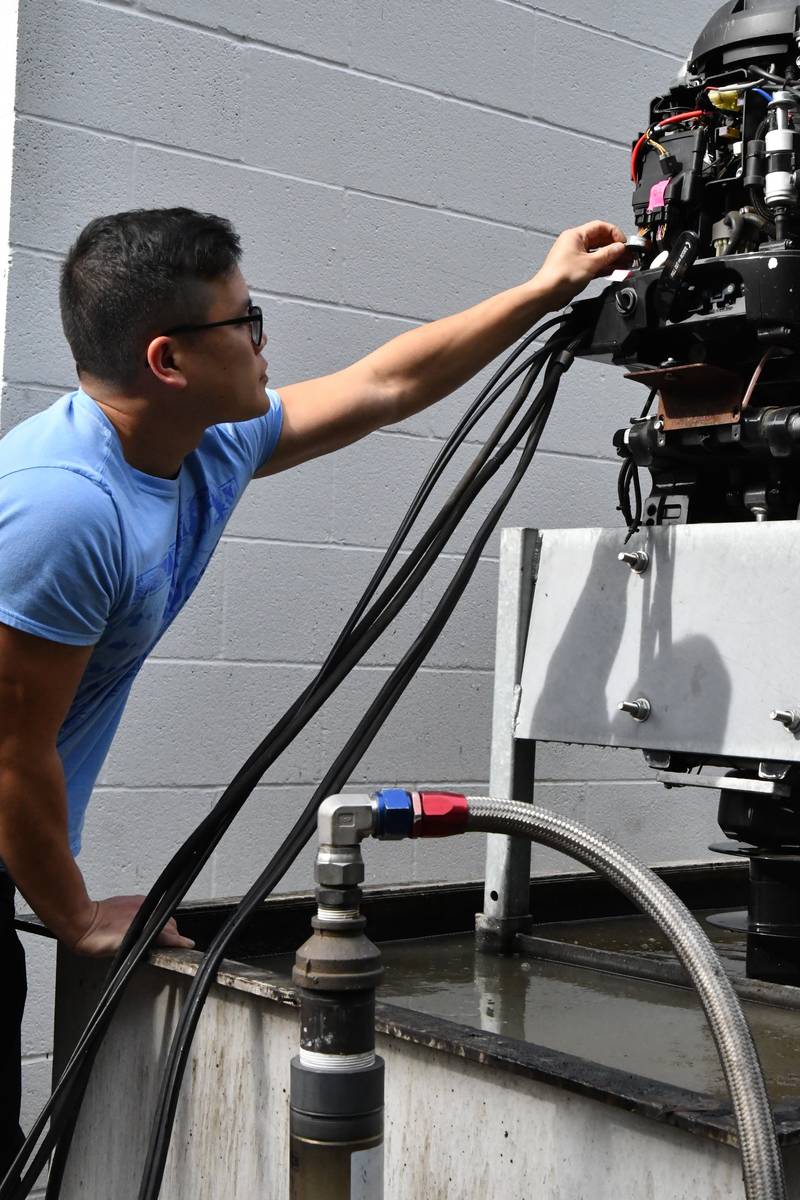 Videos of U.S. military personnel stopping drug-smuggling boats are exhilarating and frightening. They are not Hollywood movies but real-life, dangerous encounters on the high seas. In each of those instances, the use of force applies.  The High Power Microwave (HPM) Weapon Systems Division at Naval Surface Warfare Center Dahlgren Division (NSWCDD) makes those encounters safer for everyone involved.

“A significant portion of what we do focuses on vessel stopping,” said Kevin Cogley, HPM Weapon Systems Division head. “We have worked in this area for decades.”

HPM, as it deals with vessel stopping and propulsion capability, has been investigated at NSWCDD since the 1980s, according to Scott Griffiths, the HPM Weapon Systems Division technical director for expeditionary and special operations. A decade later, the mission evolved to include stopping drug and human traffickers, more harbor security missions for the U.S. Coast Guard and extra protection for the blue water Navy.
“We are looking to provide the U.S. Coast Guard with an HPM system for a one-year operational utility assessment,” said Pete Cacciola, a project lead for vessel stopping efforts in the HPM Weapon Systems Division. “Our goal is to give them another tool in their toolbox for noncompliant vessel interdiction.”

Use of HPM technologies provides for a safer alternative to other mitigations. HPM creates a middle-of-the-road option that requires less exactitude instead of lethally impacting a vessel or vehicle, which requires immense precision for deployment.

HPM weapon systems, a type of directed energy weapon system, operate by generating and transmitting extremely high electrical power levels, focused on specific frequencies and directed by steerable antenna systems. The result to a target is disruption or destruction of key components, rendering the target inoperable with little or no effect on personnel.

HPM does not replace the need for kinetic capabilities with respect to the interdiction and vessel stopping procedures, but it is an added tool to aid in the decision-making process. “When looking at noncompliant interdictions, you’re looking at higher risk,” said Cogley. “HPM eliminates a lot of that risk. In terms of threat escalation, HPM offers an alternative to putting a bullet downrange. And when considering cost effectiveness, depending on the target set, it may not make sense to shoot a multimillion dollar weapon at a low-cost target.”

Looking back, Griffiths attributes three things to getting the HPM Systems Division to where they are now: approach, technology and a shift in priority. Griffiths said the team extensively tests targets to see what affects them the most. Secondly, advancements in technology over the past 30 years have enabled the creation of smaller and more portable HPM systems. The shift in priority is also the proportional response in reducing collateral effects in military operations.

“On a ship, there is an electromagnetic compatibility program so that all of the equipment, like radars and communications systems, work properly,” said Griffiths. “Essentially what we are doing with HPM is intentionally causing electromagnetic interference on our targets by subjecting them to electromagnetic energy levels well above what it’s designed to operate.”

“Ultimately, HPM is probably safer than even a flash bang,” said Adam Clark, an HPM Weapon Systems Division member who serves as the project manager for Directed Energy at the Joint Intermediate Force Capabilities Office (JIFCO). JIFCO serves as the Department of Defense’s executive agent for nonlethal weapons. “As the sponsor for these technologies, JIFCO is invested from where the technology was that long ago and doing [radio frequency] chamber testing and seeing what frequencies work and understanding the relationship between the HPM attack and the response of the actual target.”

Another advantage to Dahlgren developing these technologies is the proximity to the Potomac River Test Range. “Our unique capability is that our engineers can build it here, take it right to the range, and we can be doing vessel-stopping work on the range,” explained Cogley.
NSWCDD also partners with other warfare centers including Panama City, Port Hueneme and Point Mugu to test and evaluate these systems.