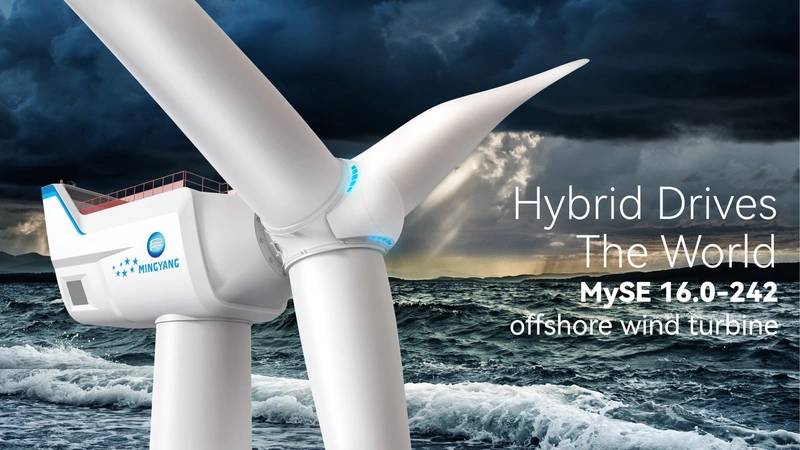 China’s MingYang said Friday it would launch one of the world’s largest offshore wind turbines with the nameplate capacity of 16MW.

According to the company, a single MySE 16.0-242 turbine can generate 80000MWh of electricity every year, enough to power more than 20000 households. In comparison, it produces 45% more energy than MingYang’s previous turbine model, the MySE 11.0-203, MingYang said.

“The nacelle weight of the MySE 16.0-242 is competitively low at less than 37 tonnes per MW. Compared to a heavier nacelle, its modest head mass allows for more efficient use of the tower and foundation construction, resulting in fewer purchased materials and logistics,” MingYang said.

Also, MingYang said that all power electronics and MV-transformer have been relocated up the tower into the nacelle, simplifying cabling and enhancing system maintenance convenience.

With the giant new wind turbine, MingYang has joined the ‘bigger is better’ party in the offshore wind turbine-making world.

Danish wind turbine builder Vestas in February this year introduced a giant 15 MW offshore wind turbine – V236-15.0 MW – at the time the highest nominal rating. The first V236-15.0 MW prototype is expected to be installed in 2022, while serial production is scheduled for 2024.

Wind turbine manufacturer Siemens Gamesa in May 2020 announced it was working on developing wind turbines with up to 15MW capacity and a 222-meter rotor – also the world’s largest in the making at the time. The prototype is expected to be ready in 2021, with turbines commercially available sometime in 2024. The giant Siemens Gamesa turbines have already been ordered – conditionally – for projects in Taiwan and the U.S.

GE, the company behind the world’s largest wind turbine in operation, Haliade X – the prototype in Rotterdam – which has been spinning since late 2019 – recently uprated that same turbine, from 12 MW to 13 MW. The uprated 13MW Haliade-X will continue to feature 107-meter long blades and a 220-meter rotor.

On top of this, GE has recently secured a contract to deliver the upscaled Haliade-X 14 MW wind turbines for the Dogger Bank C offshore wind farm in the UK.

“Utilizing 14 MW turbines instead of 10 MW ones, the number of units required for a 1 GW project falls by 28 units, from 100 to 72. Moving to a 14 MW turbine from a 12 MW turbine still offers a reduction of nearly 11 units. Overall, the analysis shows that using the largest turbines for a new 1 GW wind farm offers cost savings of nearly $100 million versus installing the currently available 10 MW turbines,” Rystad said.