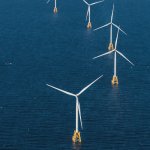 “This offshore wind goal is proof of our commitment to using American ingenuity and might to invest in our nation, advance our own energy security, and combat the climate crisis,” said Secretary of Energy Jennifer M. Granholm. “DOE is going to marshal every resource we have to get as many American companies, using as many sheets of American steel, employing as many American workers as possible in offshore wind energy — driving economic growth from coast to coast.”

The Interior Department’s Bureau of Ocean Energy Management (BOEM) is announcing a new priority Wind Energy Area in the New York Bight — an area of shallow waters between Long Island and the New Jersey coast — which a recent study from Wood Mackenzie shows can support up to 25,000 development and construction jobs from 2022 to 2030, as well as an additional 7,000 jobs in communities supported by this development. The study indicates the New York Bight lease area also has the potential to support up to 4,000 operations and maintenance jobs annually, and approximately 2,000 community jobs, in the years following. This new Wind Energy Area is adjacent to the greater metropolitan Tri-State area — the largest metropolitan population center in the United States that is home to more than 20 million people and their energy needs. The next step is for BOEM to publish a Proposed Sale Notice, followed by a formal public comment period and a lease sale in late 2021 or early 2022.

The Departments of Interior (DOI), Energy (DOE) and Commerce (DOC) are announcing a shared goal to deploy 30 GW of offshore wind in the United States by 2030, while protecting biodiversity and promoting ocean co-use. Meeting this target will trigger more than $12 billion per year in capital investment in projects on both U.S. coasts, create tens of thousands of union jobs, with more than 44,000 workers employed in offshore wind by 2030 and nearly 33,000 additional jobs in communities supported by offshore wind activity.

To position the domestic offshore wind industry to meet the 2030 target, BOEM plans to advance new lease sales and complete review of at least 16 Construction and Operations Plans (COPs) by 2025, representing more than 19 GW of new clean energy for our nation.

Meeting the 2030 target will catalyze significant supply chain benefits, including new port upgrade investments totaling more than $500 million; up to two new U.S. factories for each major windfarm component including wind turbine nacelles, blades, towers, foundations and subsea cables; additional cumulative demand of more than 7 million tons of steel — equivalent to four years of output for a typical U.S. steel mill; and the construction of four to six specialized turbine installation vessels in U.S. shipyards, each representing an investment between $250 and $500 million.

Achieving this target also will unlock a pathway to 110 GW by 2050, generating 77,000 offshore wind jobs and more than 57,000 additional jobs in communities supported by offshore wind activity – all while creating further economic opportunity and ensuring future generations have access to clean air and abundant renewable power.

The U.S. Department of Transportation’s (DOT) Maritime Administration today is announcing a Notice of Funding Opportunity for port authorities and other applicants to apply for $230 million for port and intermodal infrastructure-related projects through the Port Infrastructure Development Program. Port Infrastructure Development Grants support projects that strengthen and modernize port infrastructure, and can support shore-side wind energy projects, such as storage areas, laydown areas, and docking of wind energy vessels to load and move items to offshore wind farms. In addition to supporting our nation’s long-term economic vitality, DOT’s review process will consider how proposed projects can most effectively address climate change and environmental justice imperatives.

DOE’s Loan Programs Office (LPO) released a fact sheet to facilitate access for the offshore wind industry for $3 billion in funding through LPO’s Title XVII Innovative Energy Loan Guarantee Program. The fact sheet signals that LPO is open for business and ready to partner with offshore wind and offshore transmission developers, suppliers, and other financing partners to scale the U.S. offshore industry and support well-paying jobs. To date, LPO has provided $1.6 billion in support of projects totaling about 1,000 MW of onshore wind.

The National Offshore Wind Research and Development Consortium (NOWRDC), created by the DOE and the New York State Energy Research and Development Authority (NYSERDA), is announcing the award of $8 million to 15 offshore wind research and development projects that were selected through a competitive process. The new projects will focus on offshore support structure innovation, supply chain development, electrical systems innovation, and mitigation of use conflicts that will help reduce barriers and costs for offshore wind deployment. The NOWRDC was established in 2018 with a $20.5 million DOE investment, matching funds from NYSERDA, and with follow-on contributions from state agencies in Maryland, Virginia, Massachusetts and Maine — all resulting in a total investment of around $47 million.

Partnering with Industry on Data-Sharing

The Department of Commerce’s National Oceanic and Atmospheric Administration (NOAA) is signing a Memorandum of Agreement with Ørsted, an offshore wind development company, to share physical and biological data in Ørsted-leased waters subject to U.S. jurisdiction. This agreement is the first of its kind between an offshore wind developer and NOAA, and paves the way for future data-sharing agreements that NOAA expects to enter into with other developers. NOAA anticipates that Ørsted’s and other companies’ data will fill gaps in ocean science areas — particularly in ocean mapping and observing — in service of NOAA’s mission to advance climate adaptation and mitigation, weather-readiness, healthy oceans, and resilient coastal communities and economies.

NOAA’s Northeast Sea Grant programs, in partnership with DOE, DOC, and NOAA’s Northeast Fisheries Science Center, is releasing a request for research proposals to support more than $1 million in grant funding to improve understanding of offshore renewable energy for the benefit of a diversity of stakeholders, including fishing and coastal communities. Grant funding will support objective community-based research in the Northeast to further understanding of the effects of offshore renewable energy on the ocean and local communities and economies as well as opportunities to optimize ocean co-use.

At today’s convening, leaders from across the Administration shared their commitment to work closely with one another and with key stakeholders to deliver the economic potential presented by offshore wind energy resources.

“We are thrilled to see the White House stepping up with concrete measures to help unleash America’s nascent offshore wind industry,” said Gregory Wetstone, President and CEO of the American Council on Renewable Energy (ACORE). “Offshore wind is a potentially massive emerging sector in the U.S. that can drive billions of dollars in economic investment, create tens of thousands of good-paying American jobs, and provide abundant pollution-free power. We look forward to working with the Biden administration to advance this historic effort, helping deliver the clean energy future that Americans want and scientists say we need.”

News item from the White House